People often ask the following five questions upon hearing that I’ve lived in Japan, away from my home and native Canada, for such a long time:

(1) How did you actually end up here in Kobe, Japan?

(4) Which country do you like best? (often asked by Japanese)

(5) Do you plan to stay there for the rest of your life?

In the following three blog entries, I’ll attempt to answer these queries one by one. Let’s start with the first question.

(1) How did you actually end up here in Kobe, Japan?

I was born in Fort St. John, a small town way up in Northern British Columbia, and moved to Prince George, BC part way through elementary school, where I completed my formal education in the small logging city. I remember feeling confined in many ways by the limits of my environment and throughout high school, I often talked about making trips around the world. Plans were to travel and visit as many nations as I could.  Later, studying French at university, it seemed a given that France would be the first country on my list, and my dream was to eventually live and work there.

In 1989, I took an interest in martial arts, and as Judo and Karate seemed a bit rough, I decided to

give Aikido a go.  As I practiced, I discovered that Aikido had more than “self defense” aspects and benefits. In effect, it was very spiritually based with a focus on “win-win” mentality; you avoid being harmed by your attacker by using the negative energy coming at you to your advantage without harming the person attacking. This thought style resonated with me. I was to learn that Morihei Ueshiba deemed the art “Aikido” translating to English to mean, “Way of unifying with life energy” or “Way of harmonious spirit”. Ueshiba’s martial art combined his martial art study experiences, his religious beliefs and his philosophy. It was so unusual and intriguing to learn a sport from the philosophy or thought side first.

I also began taking great interest in world news especially topics connected with religion, or people’s general beliefs.  Several events that particularly caught my attention were, the reaction in countries around the world to a recently published book, Salaman Rushdies’ “Satanic Verses”, where the Ayatollah  Ruhollah Khomei

ni offered a one to three million dollar bounty on the  author’s death and later dropped diplomatic relations with Britain, the incident of Tiananmen Square and later, the long awaited release of Nelson Mandela from South African prison. A few years earlier, I had begun to question my own religious beliefs and practices and in light of all of these events I was pulled to wonder more about how religion or philosophy drives political decisions and international relationships.

Around the same time, Canadian friends of mine, who’d been living in Japan for two years, visited Canada expounding on their experiences there and encouraged me to consider an adventure in Asia. They showed me photos of a very different Japan to the one I had imagined. The only thing I really knew about Japan, outside of Aikido, was that great cars and super technologi 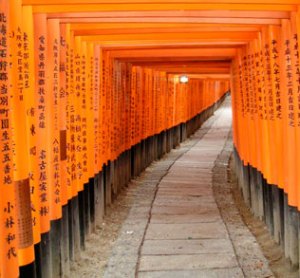 cal goods were made there, I drove a Honda Civic, and I owned a Sony Walkman and other Japanese products. Their photos were filled with gorgeous mountainous hiking scenery, temples, shrines and exciting looking festivals and festivities. The idea of exploring a remarkably foreign place, and discovering different ways of thinking in a land where Buddhist and Shinto philosophy permeate the culture, coupled with the unique opportunity to have good friends to show me around and help me through my short stay, lead me to take a leap of faith and just go with this wild and crazy idea. I applied for a working-holiday visa, the visa came through, the money fell into place and the next thing I knew, I was on a plane to Osaka, JAPAN!!!

It was April 1991 and the popular songs playing on my Sony Walkman were, “Don’t Worry, Be Happy”, “Faith” and “Gimme One Reason”…I smiled as I listened. I couldn’t find any reason NOT to go, I had an enormous pull to discover more about faiths, as I flew over the Pacific Ocean I pinched myself and said, “Don’t worry, Kim, just be happy!”